After baking Dan Lepard’s Simple White Loaf last week, I decided this weekend was a good time to bake one of the breads from the Hamelman BREAD Mellow Baker’s group. Of the three breads scheduled for this month I chose to begin with the Rustic Loaf.

I had been looking forward to this most out of all the six breads scheduled for April; not because it was different or exciting, but because it sounded like a good, decent tasting bread.

Last week I made a tin loaf and half a dozen bread buns from the “quick white loaf” dough. The bread buns made a nice accompaniment to the pea and mint soup I made up, so I decided to follow a similar pattern this week. As well as a stock pot full of soup, I set out to bake a round loaf and six bread buns using the “rustic loaf” dough. To get the right amount of dough, I took one tenth of the metric weight for each ingredient – with the exception of the yeast, as I use instant instead of fresh, so that was reduced to a third again.

I began, on Saturday evening, by mixing up the preferment. This is, I believe, a pâte fermentée which basically makes it a viable bread dough in it’s own right. I tried hand mixing it in the bowl, but it just wasn’t working… 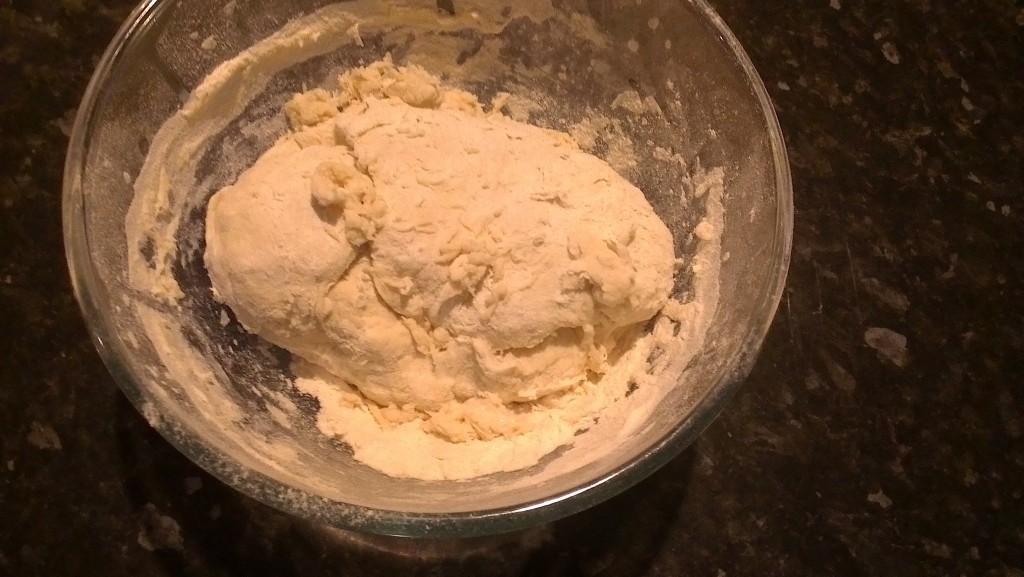 …so I turned it out onto the work surface and kneeded it for a couple of minutes, before rounding it and returning it to the bowl. 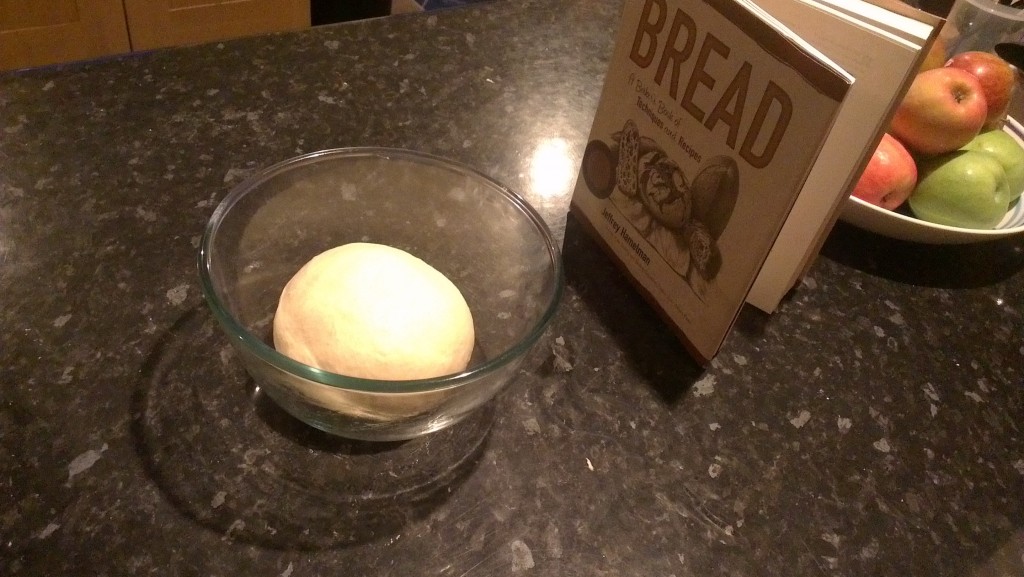 I then covered it in a shower cap (I have been going crazy collecting these from hotels when I have stayed away with work recently!) and left it to its own devices overnight.

For some reason, I hadn’t expected it to rise much. I think I confused it with a biga (another form of preferment) which, in my experience, tend to move quite slowly. Not this one! When I came down, in the morning, it was pushing off the shower cap! You can see where it stuck in the photo below. 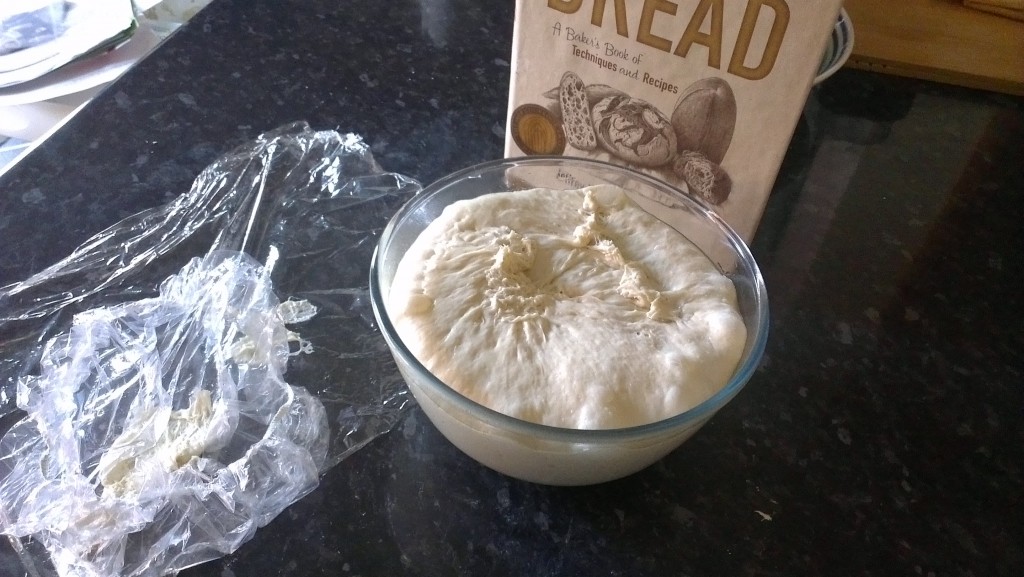 As a result, it was a little tough to work out if it had domed in the middle, so I decided it was ripe enough and pushed on.

Here is my mise en place: 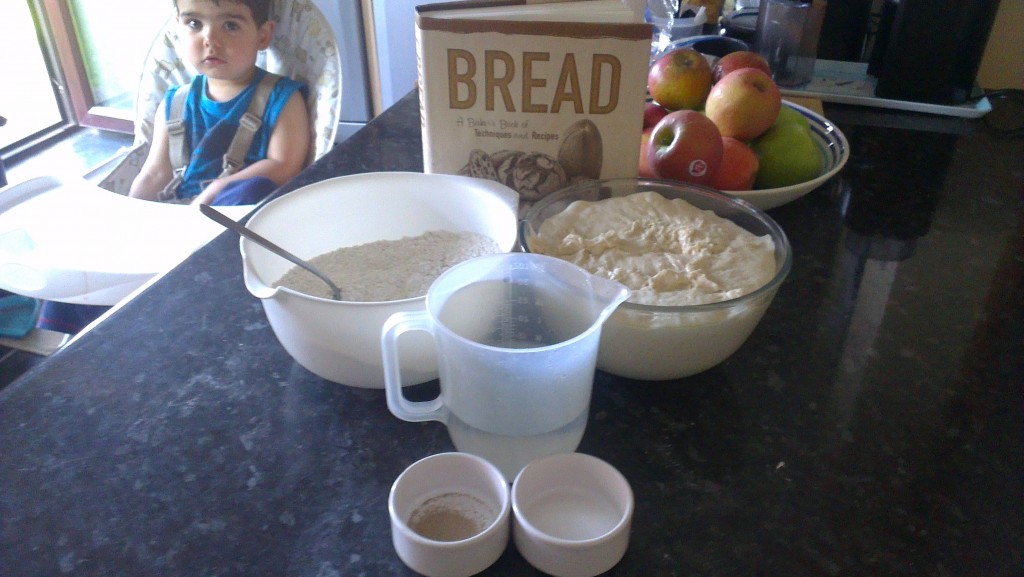 You can just make out Sebastian, the elder of my two sons, in the background. He helped me out with my bread last week (replicating most of the process with Play Doh) and he wanted to sit with me as I prepared the dough this week, too. You will probably see more of him, and his younger brother Orion, in my future blog entries as I am about to embark on a major life change. From tomorrow, my wife is returning to work after a period of maternity leave; I will be taking the next five months as a period of extended paternity leave to care for the boys myself. I will be recording my experience here in this blog, interspersed by other Mellow Bakers posts and other things which may interest me.

After mixing the remaining ingredients together, I incorporated the preferment and kneeded for around ten minutes, until I was able to form a gluten window pane. I then rounded the dough, and placed into the (freshly cleaned and oiled) mixing bowl, as modelled by Seb: 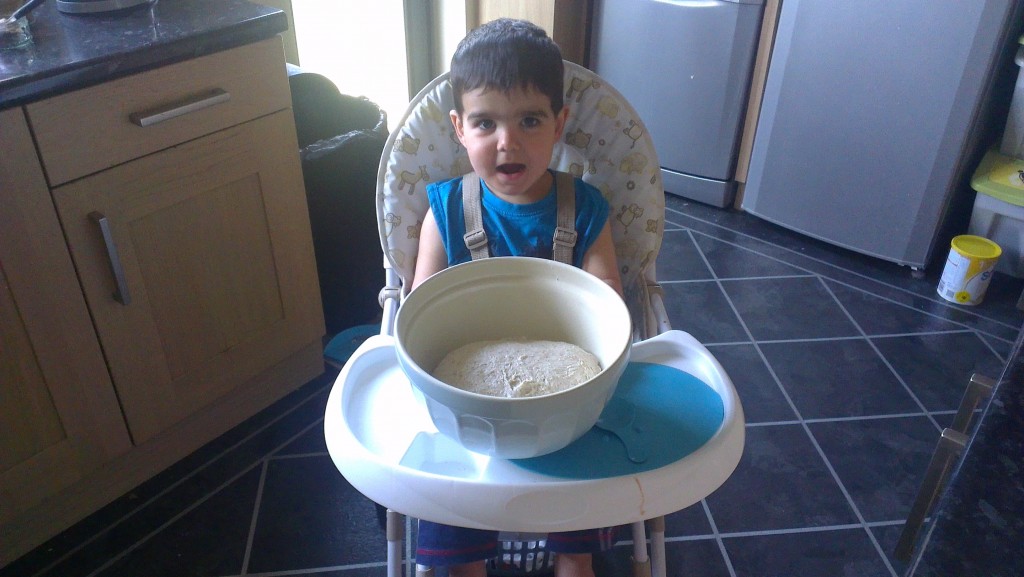 Bulk fermentation and folding followed, as per the basic recipe in the book. During this time, we made some soup and ate a portion for dinner.

With the soup drunk (I believe that is the correct verb) it was time to divide and shape the dough.

For my round loaf, I used a cane proofing basket. My mother, knowing I enjoyed baking, had recently bought me a bag of malted wheat flakes because she thought they would make a nice topping to some bread. This seemed as good an opportunity as any, so I scattered flakes into the basket before adding the rounded dough to prove. 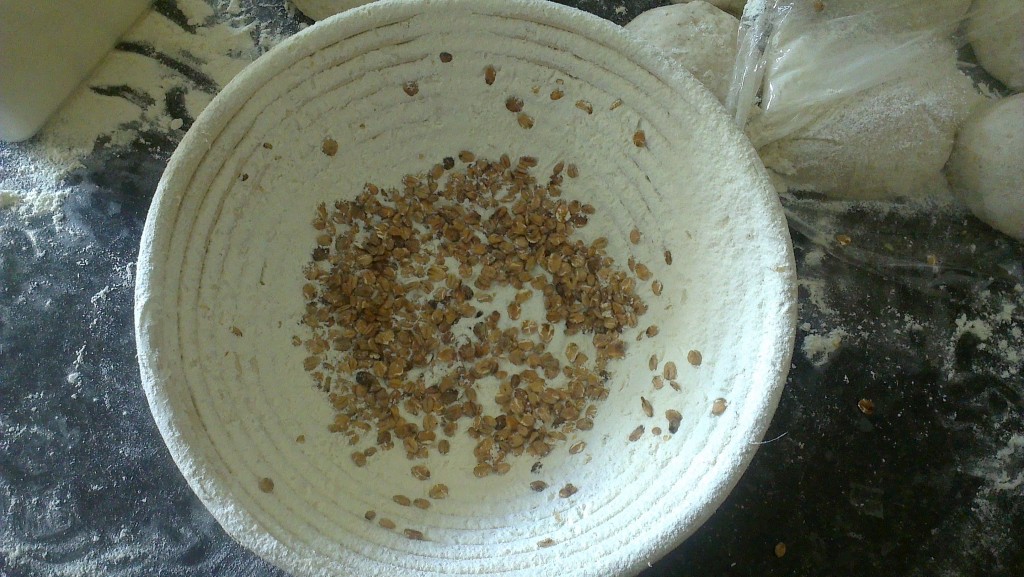 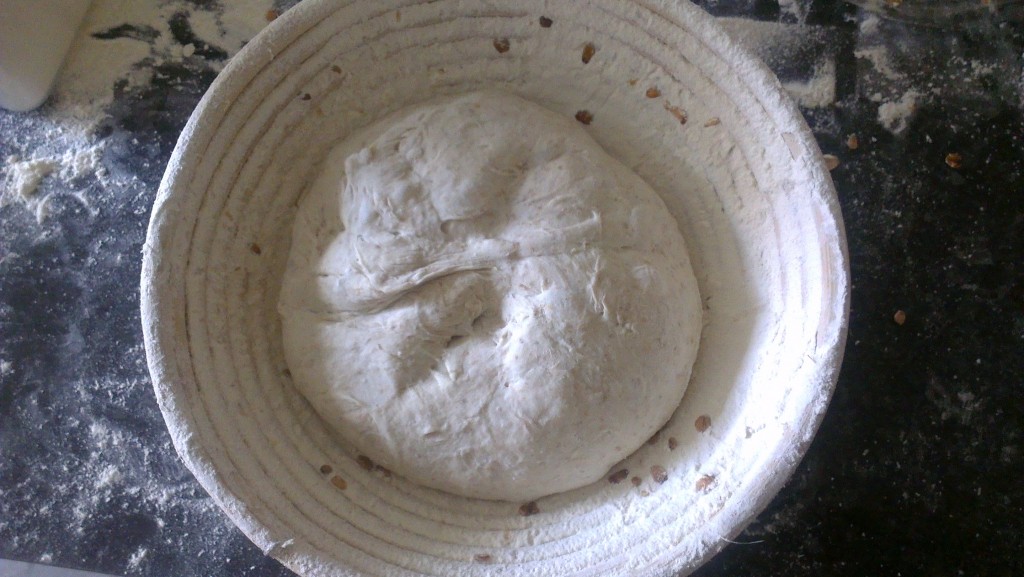 For the buns, I used a roasting tin, lined with greased baking paper. As the tin would probably have taken twice the number of buns, I placed my empty bread tin next to them to act as a fourth wall. 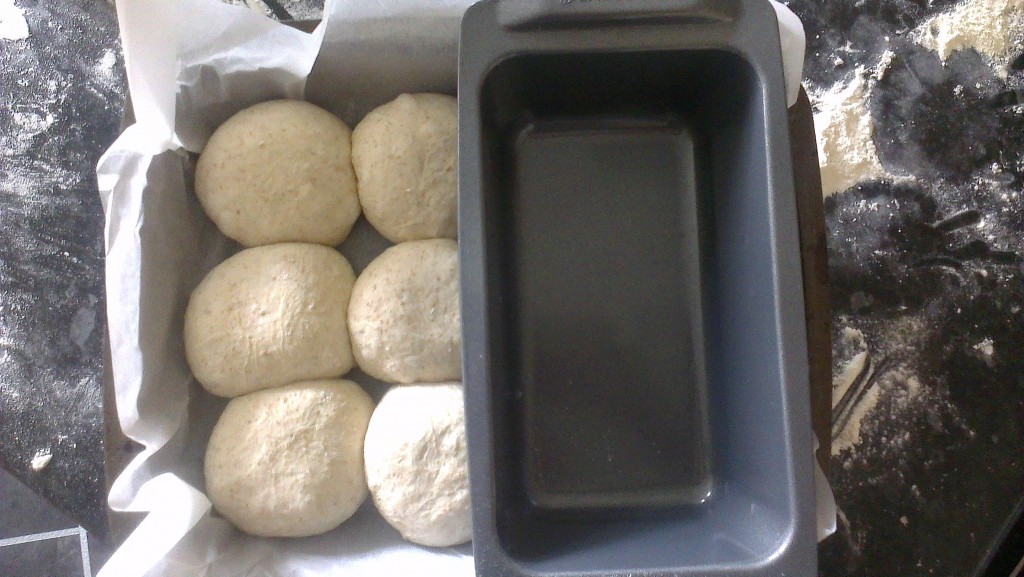 Around 90 minutes later, they had all risen and looked ready to bake. 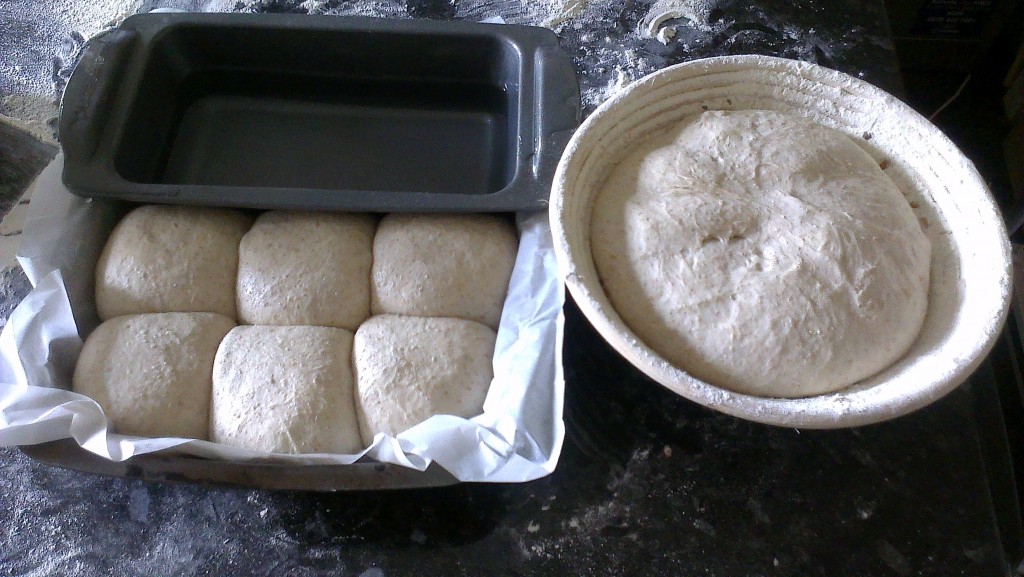 As I had employed the empty bread tin, I decided to fill it with boiled water to act as a source of steam within the oven.

I scattered semolina on a spare baking tray, and upturned the loaf onto it from the proving basket. After scoring with a bread knife, it was ready to be transferred onto my baking stone. 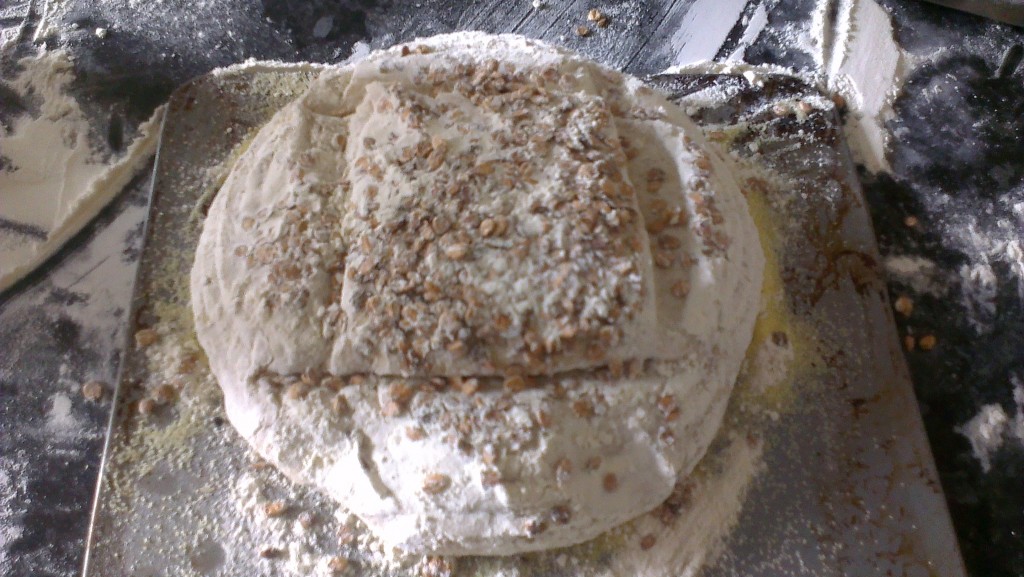 Unfortunately, at this point I encountered a little problem. I obviously hadn’t coated the tray with enough semolina – or spread it well, at least – so the loaf stuck to my makeshift peel. I was able to force it off, but it’s elegant, rounded shape was slightly mutated in the process.

Never mind. 40ish minutes later, I was able to remove a delicious smelling, if slightly deformed, loaf out of the oven, alongside six plump bread buns. 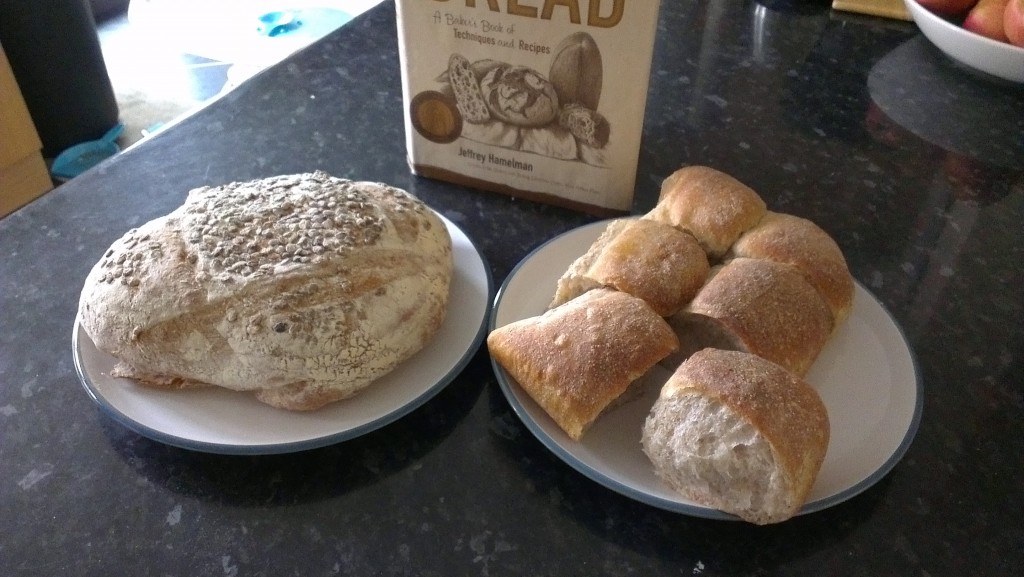 We cut a couple of slices from the loaf to accompany our evening meal. 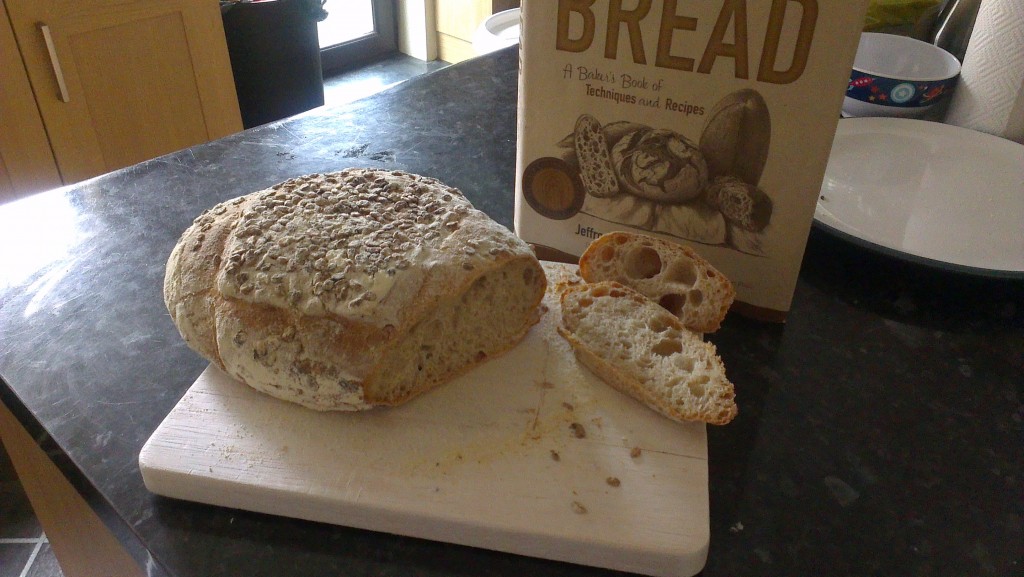 It tasted great, and I was (pleasantly) surprised by the texture. The crust was quite chewy, almost like a good sourdough, and the crumb was nicely open. I’m certainly looking forward to a toasted slice for breakfast tomorrow, and a taste of the bread buns to accompany a little more soup.

Mellow Bakers are a group of people, from around the world, with a shared interest in baking bread. Some of us do it professionally, some just for a hobby, but we all do it for pleasure. The group are currently baking through two books about bread: BREAD by Jeffrey Hamelman, and The Handmade Loaf by Dan Lepard. Each month, three breads are selected at random, from each book, and we each bake as many or few of the selection as we would like – hence the Mellow in the name. Everyone is welcome to join in, so why not treat yourself to one of the books and switch your oven on?